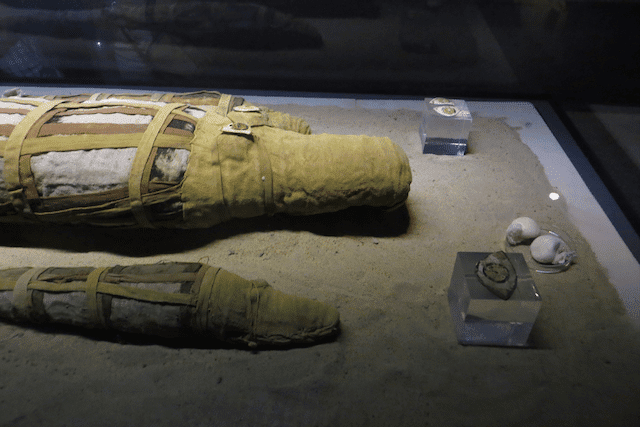 Today we saw two temples. The day was broken up by sailing between the two locations, so there was a lot of time for resting. The first temple at Esna is the Temple of Edfu. This temple is from the Ptolmeic Period or The Late Era, and therefore, 1000 years younger than Karnak and Luxor Temples. When we got off of the boat, we took a horse and carriage through the streets to the temple. This ride allowed us to see the streets of Esna. When we got to the temple, the haggling was worse than other areas. We finally pushed through “the gauntlet” and into the temple. One of the amazing things about this temple is that it is still standing mostly unrestored. The ceiling is mostly intact. It is the only temple where the inner and outer walls plus the exterior mud brick wall is still standing.

This temple tells the story of creation. The story is a fascinating tale of gods and war, but the most interesting thing is the parallels to other religious stories. Atom, who was the first god and the building blocks of life, made two gods from the earth, one male and one female who have four children (two sons and two daughters). The two sons marry the two daughters. One of the sons, Set, kills the other son, Osiris (think Cain and Abel), but Osiris’s wife, Isis, resurrected him. As Isis was resurrecting Osiris, Set came and chopped Osiris into pieces so that he could not be fully resurrected. However, just as this happened, Osiris magically impregnated Isis (think Mary being impregnated by God with Jesus) with a child named Horus. Isis flees with Horus into the Nile Delta for protection from Set, seeking protection with Hathor, the cow god (again think how Mary and Joseph fled to Egypt to protect Jesus from Herod). In the end, Horus grew up and defeated Set to rule over all of Egypt (almost like Moses was saved by his mother and came back to save his people). It makes you wonder how all religious stories came to be and if they are all from the same base. Additionally, the first beings created had children without asking Atom and were punished by him, just like Adam and Eve were thrown out of the Garden of Eden.

After we left the temple, we grabbed some ice cream to break our larger bills. Funny, we wanted small bills and the man selling the ice cream said he only had so many small bills but, if we bought water, we could have the change he had. Very clever. As we were leaving the area, we looked at buying Galabeyas for the party that night. We tried them on and asked for the price. The seller wanted 750 Egyptian pounds higher than the price in the boat’s small shop. We said no and the vendor started to lower the price. We negotiated down to 400 and he said he would come to the boat for more money. We said no. He came down to 300 asking for a small gift for himself. Finally, my husband said “300 or nothing” and the vendor said “ok, thank you my brother” and left. So we took the horse and carriage back to the boat where we rested and had lunch as we sailed to Kom Ombo.

When we arrived at Kom Ombo we got off the ship to find the temple directly in front of us. We passed a few vendors before entering the temple, right at sunset. This temple is also from the Ptolmeic era, but since it is so close to the Nile, it is badly damaged with many parts missing. An interesting thing about this temple is that it is divided into two sections, the left side dedicated to Horus and the right side dedicated to Solbek, the crocodile god. This division is very unusual as most temples are dedicated to one god. The temple was also used as a healing place or hospital, so there were inscriptions about medicine with medical and surgical tools. There are even depictions of childbirth on the walls. Additionally, there is a Nile meter at this site, which was used to gauge the level of the Nile floods and judge how good a harvest season and taxes from the harvest will be. This temple has inscriptions about the harvest and a calendar with dates and seasons. As we left the temple, we went to the museum at the front where mummified crocodiles are displayed. These crocodiles and crocodile eggs celebrated the god Solbek. After we returned from the temple, we relaxed a bit and had a moonlight Egyptian dinner on the sundeck. After dinner, we went to the Galabaya party. At the party, people dressed in traditional Egyptian clothing. There was dancing and games for a perfect end to the night. I wrapped my husband like a mummy in one game. We even won a dancing game and received free hibiscus tea as a prize.

River cruises are a perfect way to see many areas: River cruises are perfectly planned and paced to allow you to see the most without feeling like you are running around. Like on this day we visited two cities, but instead of driving between the two, we were able to get back on the boat, have lunch and a rest before getting to the next city.

Learn how to haggle: There are many areas where vendors expect that you will haggle with them. In these places, if you don’t negotiate you will end up paying more than even the vendor expected. So, brush up on those negotiation skills.

Partake in the fun and games: This evening we could have gone to dinner and then turned in for the night. We had some long days and were a bit tired. However, dressing up and enjoying the fun put an exclamation on our night.