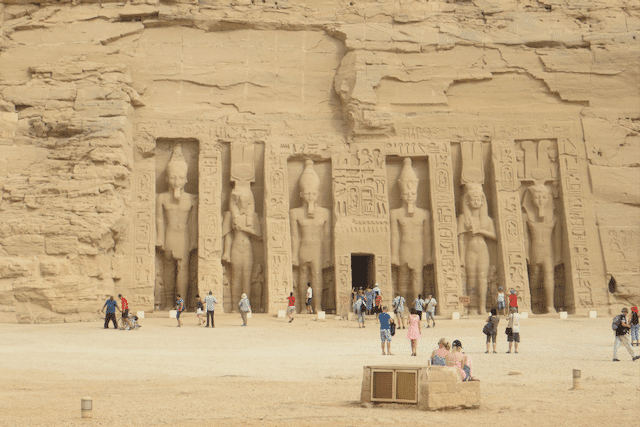 Today we woke up at 3 AM to go to Abu Simbel. Because Abu Simbel is in the desert toward Sudan, there are only two tourist convoys that go each day. We woke up and received our boxed breakfast on the boat, before getting onto the bus. The ride was three hours, of which we slept through most of it. Once the Sun was fully up, we began to awake and eat our breakfast. The entrance to Abu Simbel is heavily guarded because the temples are in the middle of nowhere. There are two temples at Abu Simbel, the first one is celebrating Ramses II as he proclaims himself a god, and the second is celebrating his favorite wife, Nefertari, and dedicated to the goddess Hathor. Amazingly, these temples were 200 feet lower on the mountain than they are today, but due to the building of the high damn and formation of Lake Nasser, the temples were cut into pieces and moved to avoid their destruction.

As we walked up the backside of the temple, we knew that there was going to be something amazing around the corner. The statues of Ramses at the front of the temple are gigantic. Upon walking in the temple, it is amazing with reliefs describing a great battle of Cush and Ramses giving respect to the gods. At the alter in the back of the temple, Ramses sits with the gods, claiming himself as a god. An amazing thing about this temple is that on October 22nd and February 22nd the sun comes through the front door and perfectly lights up three of the four gods in the altar, Ramses, Amun and Horace. The god that is not lit up is the god of the underworld, Ptah. These two dates are important, because they supposedly mark the birth date and coronation date of Ramses II. It was important that the reconstruction assured a placement that recreated this event. In addition to the statues, there were tons of bats inside this temple.

The second temple dedicated to Hathor is considerably smaller. Inside there are several images of Hathor and Nefertari receiving blessings from Isis. There are images of Nefertari in beautiful clothes and crowns. Of course, no photos were allowed in either one of the temples but the outsides alone were amazing, especially since, even though it was moved, it is incredibly hard to see any seams. After touring the temples, we went up to meet our tour guide, Alaa, and wait for the caravan back to Aswan. Of course again, we slept most of the way. While we were awake, we were able to see interesting views of the desert. We made it back to the boat, where we showered and collected our luggage. We then headed to a restaurant to eat a late lunch and go to the airport. Unfortunately, when we got to the airport, we noticed the flight had been delayed an hour. Slowly, an hour became six hours. Of all things there was a sandstorm and a rainstorm causing the flight to be diverted to Luxor until it was cleared to fly. Finally, we made it to the plane and Cairo, where we met Islam and headed to the hotel. At this time, we decided to rearrange our trip to have the next day be a free day, because it was late and we had been up since 3 AM.

Don’t shy away from day long side trips: The trip to Abu Simbel was another add on and it was amazing! Yes it took all day, however it was well worth it and we were able to snooze on the bus.

Have patience with the weather: Even in the middle of the desert, a rainstorm can throw a wrench in your plans. Be patient and flexible to switch things up a bit when the weather throws you a curve ball.