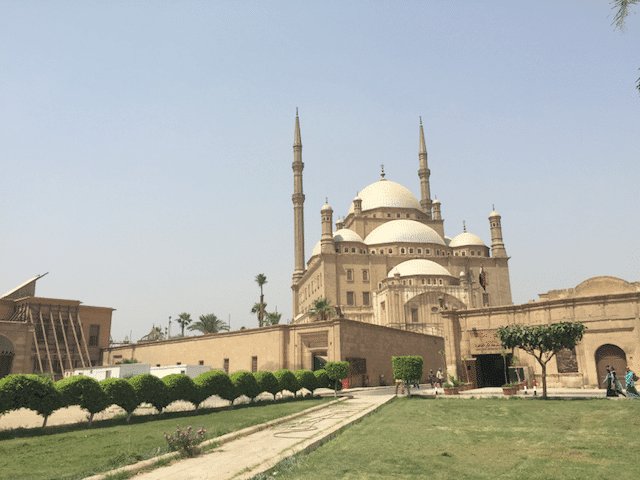 Today, we woke up to be at the Egyptian museum when it opened at 9 AM. We started off with breakfast and then met our tour guide, Makmud. Unfortunately, there are no photos allowed inside, but we took some photos outside in the garden. The museum was packed and hot. There is only air conditioning in the two Royal mummies’ rooms within the museum. The museum is full of an unbelievable amount of artifacts. It was built in 1900 and holds everything from large statues and sarcophagi in the garden to small trinkets. There are also papyrus scrolls with beautiful writings. It was amazing to see how even wood pieces still had painted colors on them. There are so many pieces, it looks as though they have just placed artifacts everywhere with no rhyme, reason or protection. Of course, the main attractions where the treasures of King Tuthankamun and the Royal mummies. The Royal mummies are in an area that you have to pay an extra fee. In addition to the air conditioning, these are the only two areas that are nicely laid out. The King Tut treasures are unbelievable. There is so much gold — from the three boxes that the sarcophagi were stacked in like Russian dolls to the jewelry and burial mask. It was stunning. They had chariots, beds, and more from the tomb. The Royal mummies were also amazing. Of course, Tut’s mummy is not in his tomb, due to the curse of the mummy, but there is Ramses, Hatshepsut, and Seti just to name a few. The mummies are so well preserved, you can see facial features and even hair from small tufts to full heads of curly hair on female mummies. We spent three hours in the museum. You could spend much longer, but with it being so hot, three hours was enough.

After the museum, we headed to the citadel. This is a military tower, palace, and mosque built by King Muhammed Ali. The palace is currently closed for restoration, but the mosque is open. Inside was beautiful. Makmud explained to us about the Muslim prayer rituals as we sat on the carpet in the mosque. As we were leaving, a few little boys asked to take a photo with us. I’m guessing they do not see many Americans. After the mosque, we headed to lunch and back to the hotel. At the hotel we hung out at the sky pool, which has beautiful Nile views. We also went to the mall attached to the hotel for dinner.

Plan to tour heavily visited areas early: Areas where there will be a lot of tourists are best seen in the morning. You are able to get in and see more before all of the crowds.

Take your temperature: In a place like Egypt where it is hot even in the fall and winter, make sure to understand when you are getting too hot. Before you go pack well for the weather and while you are there look for places like the mummy room where you can cool off.