Day 6 |Luxor & Valley of the Kings 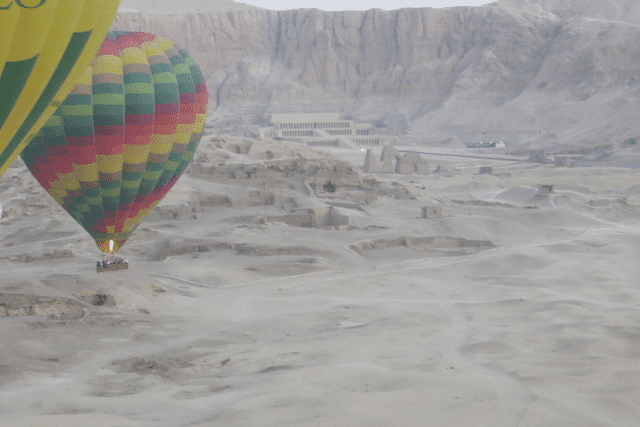 Today we got up at 3:30 AM to do a hot air balloon ride. We woke up and received our boxed breakfast with sweets, croissants, fruit and juice. From the cruise ship, we took a bus to a dock where we met up with others who were taking the hot air balloon ride. At the docks, we boarded a little boat that took us, with a police escort, to the West Bank of the Nile. From here, we boarded another bus to take us to the balloons. Upon arriving at the take-off location, we poured out of the van and hopped into the balloon. The ride was amazing! The captain explained everything we saw from the Valley of the Queens, the Valley of the Kings and the Workers Village to Habu Temple, Hatshepsut’s Temple and the Temple of Memnon. From the sky, you were really able to see how everything relates to one another. We were also able to see over the crops in the villages, how people lived by peeking into their yards and sometimes  into their homes when they had unfinished roofs. At the end of the ride, we actually landed in someone’s sugarcane field and walked to the road, where we were met by our bus to take us back to meet up with the other people on our next tour.

After syncing with our group, we toured The Statue of Memnon, which was discovered and reassembled near the first part of the Temple of Memnon, currently under excavation. We left here and headed to the Valley of the Kings. At the Valley of the Kings, we were able to go into three tombs, Ramses VI, Ramses IX and Memhotep, son of Ramses III. These tombs were all beautifully painted inside. One of them still had a huge sarcophagus in it. Unfortunately, like the Valley of the Queens, there are no photos allowed. There was an option to go into King Tuthankamun’s tomb, but after learning the treasures are in the museum and the tomb is like the ones we just saw but smaller, we passed on the additional ticket. Some people from our group who bought the extra ticket confirmed our decision.

After the Valley of the Kings, we went to see Hatshepsut’s Temple. She was a great female king that took the throne when her husband died. After her death, her grandson defaced all of the monuments with her name and likeness on them. Because she was not male, he believed she stole the crown. During her reign, she tried hard to be as male as possible, including being depicted as a male with a false beard. Her temple was built next to a Middle Kingdom temple and, as a result, she built her temple in a way to mimic this style, making it the only standing temple in the Middle Kingdom style. Luckily, all of her likenesses and names in the temple were not destroyed, so we know it was hers. One of the beautiful paintings on the temple depicts the expedition to Punt that occurred during her reign, to trade for spices and other goods.

After the temple, we headed to a factory where people made alabaster and granite sculptures using antique methods. This was interesting to see and afterwards there was time to browse. Finally, we headed back to the boat around noon for lunch and relaxation as we sailed to Aswan. During this time, we sat up on the deck and took a dip in the pool. While we were on the deck, a boat pulled up next to us trying to sell Galabayas by throwing them over onto the ship. The journey took us through the locks at Esna. To get to the higher side of the Nile through the locks, we went in with another boat and stayed as the water filled the lock, lifting us up to the level of the Nile on the other side. The rest of the evening was for relaxation and dinner. We went to bed early, because we had been up for so long.

Don’t be afraid to steer from the normal tour: The standard Nile River cruise did not include the hot air balloon ride, but I learned about it and asked to add it on. It was most definitely worth the early morning!