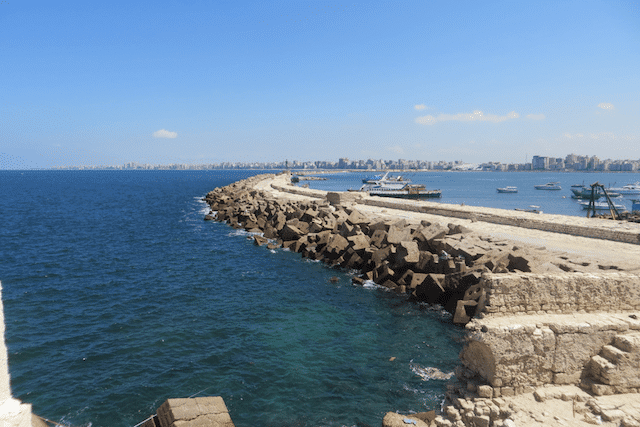 Today was the last day of our trip. We woke up early to take a three hour ride to Alexandria. The ride, unlike the one to Abu Simbel, was on an interstate. We passed 6th of October City, an area named for the day of the Egyptian revolution, which is like their Silicon Valley, and an area where there are many factories. The air was particularly bad by the factories and you could barely see 10 feet in front of you. As we neared Alexandria and the Mediterranean Sea, the air cleared and for once we saw blue skies. Our first stop in Alexandria was to the old Roman catacombs. This spot was actually found when a donkey fell into a hole in the ground. The catacombs are where people were buried in ancient times. There are three floors but only two are accessible, as a third is still flooded by the high water table created by the Nile. Unfortunately, at one time the whole thing was flooded, so not many artifacts were found here. What remained were bodies in the tombs that are carved into the walls and the crypt of an unknown Greco-Roman king. Interestingly, when the Greco-Romans took over Egypt, they adopted most of the gods from Egypt. As a result, the crypt was like an Egyptian one. The only difference is the drawings are slightly different stylistically and the clothing was all Greco-Roman. The same gods and imagery are used. Of course, no photos were allowed.

Our second stop was the temple dedicated to the bull God Apis, who is the one god that is different for the Greco-Romans. This temple is mostly destroyed but what is left are ruins, some catacombs with statues and important papyrus papers, and Pompey’s Pillar, flanked by two sphinxes. In the catacombs, there is only one statue of the god Apis, and it is a replica, as the original is in the Alexandria museum. Pompey’s Pillar still stands as the largest Greco-Roman pillar and is a great site to see.

The next stop was the library at Alexandria. This library is the second largest in the world, only smaller than the library in Washington D.C. The library has museums inside detailing the history of printing, a pictorial history of Alexandria, and the works of Shadi Abdel Salam, a famous Egyptian film director. After the library we headed to the Citadel of Qaitbay built by Sultan Al-Ashraf Sayf al-Din Qa’it Bay. All along the way, we enjoyed the city. It was amazing to see how big the market is and how they will put livestock anywhere. The Citadel is on the coast and is a sight to see. Built in 1477, it has been restored and can be completely explored. We were able to go through many rooms including Egypt’s oldest mosque and the areas where the Citadel was defended by cannons and bow and arrows. We were also able to go up to the outer wall to see a great panoramic view of Alexandria and the sea. Once we left the Citadel, we went to lunch at a fish restaurant on the sea. The fish was great and we had a beautiful view. After lunch, we headed back to Cairo, through rush-hour traffic and the haze, passing banana, grape, mango, and corn fields, factories, and luxury suburban compounds. When we got back to the hotel, we started to prepare to pack. Calvin was departing that evening to work in South Africa and my flight was in the early, early morning to go home.

Check out the photo gallery

Go back to the begining of the trip