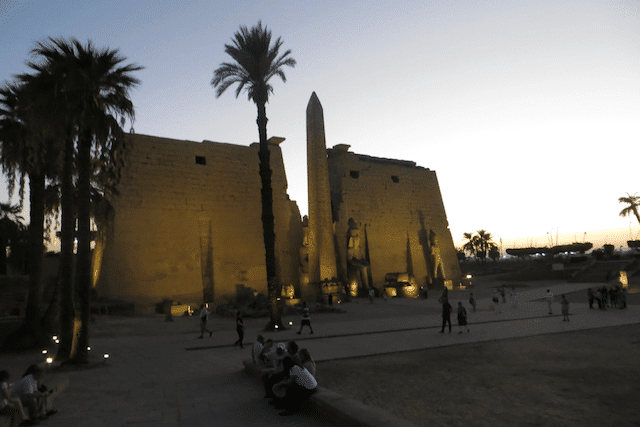 Today we begin the Nile cruise on the Sonesta St George cruise ship. We were able to sleep in a bit and go to breakfast, arriving right before they stopped serving. After eating, we returned to the room to pack, so that we were ready to go when Ruby arrived. We drove to the cruise dock and checked in. After we checked out the room, we headed to lunch. After lunch, we prepared for the day’s tours. For the tours on the cruise, we are in a small group with Alaa as our tour guide. There are about 10 other English-speaking people in our group including a couple from Tampa, two groups from Chicago and a group from Atlanta.

Our first stop for the evening was Karnak Temple. This temple was dedicated to Amun Ra, the lead God of the New Kingdom. It was built throughout the centuries by several different Pharaohs and is the largest temple complex in the world. There is an area with over 100 pillars, several courtyards, a holy water pool, and huge obelisks and statues. It is just amazing! The entrance is an avenue of Sphinxes made of a lion body to represent strength and the head of a ram to represent the god Amun Ra. The large entrance was made by Ramses II. We toured the temple for a couple of hours before heading to Luxor Temple.

Luxor Temple is also for Amun Ra but it is smaller, as it is supposed to be his private residence with his wife, Mut. The temples are connected by roads of more than 100 Sphinxes with the Kings head that was just recently excavated. Luxor Temple was mostly built by one pharaoh. It is just as lovely as Karnak Temple, just smaller. Interestingly, the temple was covered by sand from sandstorms which occurred over many years. During the Roman times, a Christian church was built on this land. In the Islamic era, a mosque was built on top of the church. Even though they have excavated the land surrounding the mosque to reveal the temple, the mosque still stands and functions. The inner temple chamber was built by Alexander the Great and includes hieroglyphic images portraying him as a mighty Pharaoh. Like Habu Temple, both of these temples have graffiti from people who visited hundreds of years ago. Also due to the church/mosque/Alexander the Great influences, the temple has many languages and imagery on it. After the tours, it was evening and we headed to the boat for dinner and a belly dancing party.