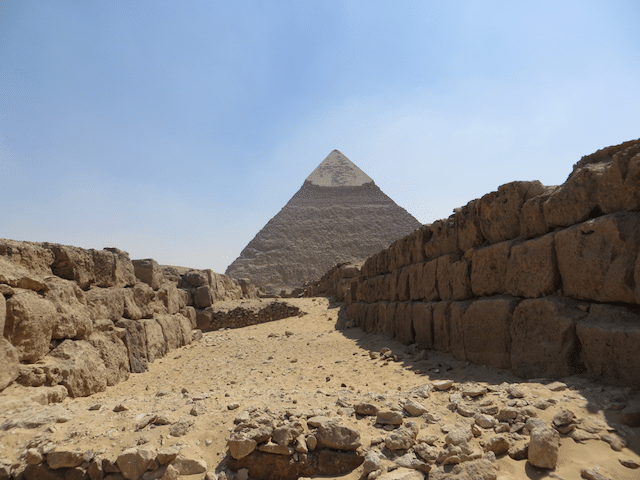 Today was a long day visiting the great pyramids. We started the day out early with breakfast at the hotel. After breakfast, we met Islam and our tour guide, Makmud. We started off visiting the great pyramids on the Giza Plateau, which were right around the corner from our hotel. Makmud detailed history about the pyramids, starting with Kufu’s pyramid, the largest and oldest on the plateau. We had previously decided not to go into the pyramids since there is nothing in them anymore. We instead walked around the plateau and went up to the entrance of Kufu’s pyramid. From there we walked to Kafre’s pyramid, the second oldest and the only one that still has the original smooth limestone casing on the summit. From the second pyramid, we rode in the car to a panoramic view of the pyramid complex. The view was amazing! From the top, you could see all three great pyramids and the smaller pyramids around them designated for the pharaohs’ Queens. We then took a camel ride down from the panorama to the third pyramid of Mencare. The camel ride was peaceful and allowed us to ride through the desert. It was just like riding a horse but much higher.

When we got back to the third pyramid, the car met us and we drove to the Sphinx. From the Sphinx you could see a different view of the pyramids. Being up close to the Sphinx you could see how it has been restored over the years. We then headed to Memphis, and made two stops or “mini tours” on the way. They were really shops where we could buy things. The first stop was a papyrus shop. They showed us how real papyrus paper was made by soaking and pressing the papyrus plant. We then moved on to a jewelry shop, where they make cartouche pendants with your name in hieroglyphics. Once we left the stops, we went on to lunch at a local restaurant. Lunch was pretty good, a fish dish and many spreads for pita bread.

After lunch we went on to Memphis. There really is not much to see at Memphis as the city was completely destroyed when the Nile flooded. As a result, all that is left are ruins that have been found and placed in an outdoor museum. On the way to Memphis, we saw how people were living in the villages. There was trash throughout the canal that is used to irrigate the villages. From Memphis, we went to Saqqara, where we saw the Step Pyramid, the first pyramid built in Egypt. We walked around the pyramid and its temple complex. In the same area, we visited the pyramid of Titi and the tomb of his high priest. Here we went into the tombs and saw early art on the walls that still had painted surfaces. In addition, as a “bonus,” my husband was able to take a photo in the sarcophagus of King Titi (however this did give us the mummy’s curse). After paying a tip for the extra access, we got back in the car and drove back to Giza. On the way to the hotel, we saw an accident where a tuk-tuk, small taxi, fell over as it was coming around the curve. People were helping to push it back up right. We finally made it back to the hotel to rest a bit. That night we headed back to the Giza Plateau to see the sound and light show. Seeing the pyramids lit at night was beautiful, but the show was really dated and lackluster. We then headed back to the hotel. We went to eat dinner at the hotel restaurant and rested for the next day.

Soak in all of your surroundings: Many tours at tourist destinations have a stop at some type of shop. Instead of being annoyed, take a look around and pay attention. You never know what you will learn about local crafts.

Pay attention to other traveler’s reviews: Most of what I had read previously about the lights show was that it was dated. However, I thought it must be interesting because there is a light show at every major monument in Egypt. However, the reviews were right, they are very lackluster.