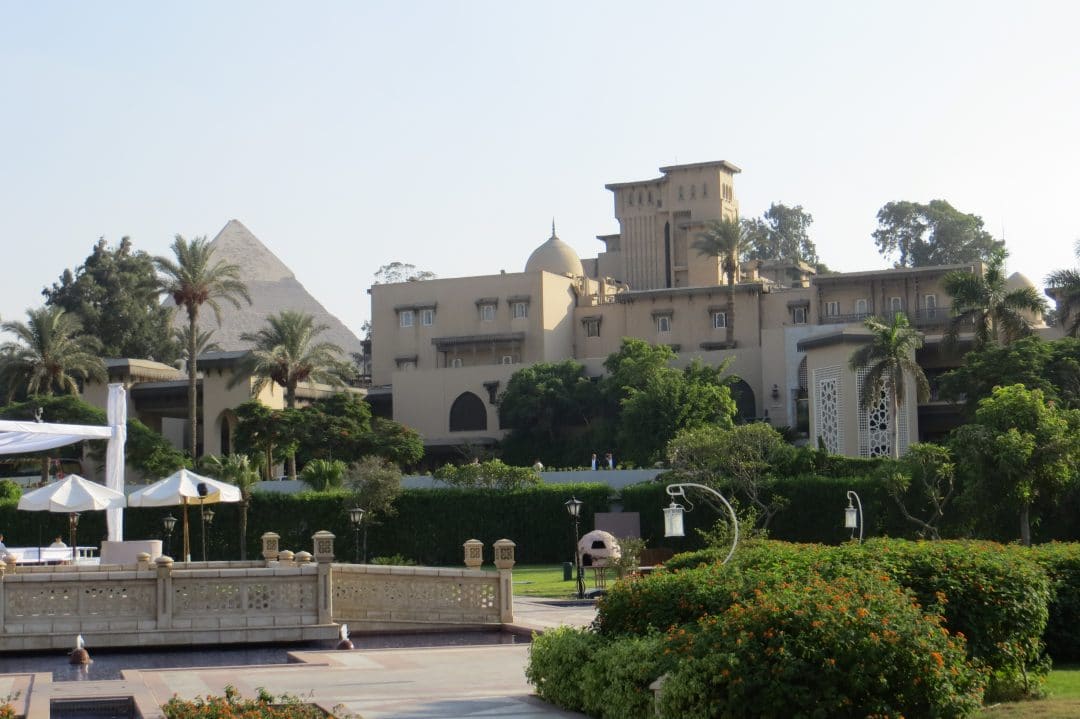 Today was a free day at the Giza plateau. After breakfast we toured around the hotel, The Mena House, which was the palace of the last king of Egypt, King Faruk. This huge and beautiful former palace has many rooms with very ornate decorations. You could see how over the years the original palace transformed into the hotel that it is today. There were several historic photos of the palace that showed its transformation, as well as paintings of the royal family. Unfortunately, due to economic downturn and lack of tourists, most of these areas, including the meeting rooms, lounges and restaurants were empty.

After we toured around The Mena House, we walked up to the pyramids. Right away people started asking if we wanted a horse or camel ride. Everywhere people were trying to sell things. When we finally made it in the complex, we viewed the pyramids and then walked over to the area where the priests and children of the pharaohs are buried.

This area still is very much under excavation. There were boarded up shafts and doors and partially uncovered structures.

It was interesting to see how large the complex is and how much excavation is still occurring. Once we left the burial area, we walked back over to the Sphinx and around to the Solar Boat Museum.

Upon entering the museum, we had to put on shoe covers, for which we had to pay a small fee. The Solar Boat Museum is the home of the sail boat found near Kafre’s pyramid. It is the only complete existing boat from that era. This boat was the funeral boat used to bring the pharaoh down the Nile to Giza.

After transporting the pharaoh, the boat was disassembled and buried for the afterlife. Archaeologists found the boat and reassembled it.

The boat is a huge wooden sailboat which has oars for rowing. Aside from the beauty, the boat museum was a respite from the heat as it had air-conditioning. From the Solar Boat, we walked around the backside of the pyramids to the shade. We stayed around the pyramids until the complex closed at 4 PM. We walked back to the hotel to take a shower, pack and head to the airport to fly to Luxor.

After an hour ride in crazy Cairo traffic, we arrived at the airport. After checking in, we discovered there was only a small café to buy food. We had a sandwich for dinner before getting on the plane. Right before we got on the plane, we realized that there was a security checkpoint at the entrance to the tarmac. Unfortunately, we had just purchased large bottles of water at the café. We began to chug the water. My husband was able to drink his, but I was not. However, we noticed a man in front of us putting a bag of water bottles on the x-ray machine’s conveyor belt. So I walked through carrying my water bottle and the guard didn’t care. We then took the bus to the plane and readied for takeoff. Right before the safety video, a voice came over the intercom as an image of a mosque was displayed on the screens. We quickly realized that they were doing a prayer for the flight. After the prayer, we were off to Luxor in no time. Upon arrival in Luxor, we met Ruby, our Luxor tour manager, and went to the hotel, Sonesta St. George, for good night’s rest.

Leave room for free days: Always leave time for free days when you are traveling. These days allow you some rest and provide an opportunity to loop back and see something you might have missed. While a fully booked trip seems like the best way to see everything, if you get too tired you will not appreciate everything you are doing.

Be respectful: When in another country remember to be respectful. Don’t violate rules and laws. Also, even though it might be annoying, be respectful to street vendors. Remember, trying to sell you things is their livelihood.