We were once again up early, only this time we were up at 3 am and even at that time we could look out and see we were near land.  The sun was beginning to rise and the view from the cabin was absolutely beautiful.  Looking from the cabin’s balcony, I could see several other cruise lines were also preparing to dock.  We were expecting the weather to be cool and maybe a little rainy.   Instead we got an amazingly warm and sunny day.  We still took our jackets with us but there was no need for rain gear or hats and gloves.

Once breakfast was completed we headed to the gang plank to begin to explore the city before our tour begun at 9:00 am.  We were off the ship by 7:30 am and surprised to see that all of the stores in the downtown area were already opened.  Most of them were jewelry stores and they all had someone standing in front trying to get you to come in with the promise of a free charm for a cruise charm bracelet if you would only let them give you a price for something. 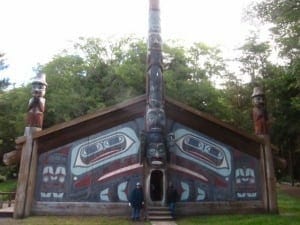 The tour we took was called the Brite Lights Totem Pole.  After being picked up by a bus, we arrived at our destination about 45 minutes later.  Again we had a talkative bus driver, but she too was entertaining.  Once at the location our tour guide took over and began to explain the totem poles to us.

The totem poles were originally made from red cedar trees.  Each pole tells a different story, be it a myth or someone’s life story. In fact, some of them had an area in which to bury a deceased person.  They were painted red, white, black, and green.  Before the advent of paint, the natives devised ways to get the colors needed for painting.  The village women would chew salmon eggs and spit it out to make the base for the paint.  They would then add iron oxide (red), charcoal (black), sea shells (white) or, ostrich shells  (green) to get the desired color.  Each object on the pole stood for something different. 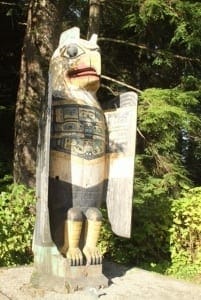 For instance, a raven was thought to have supernatural powers and be the creator of the world, a bear had great strength, a watchman stood atop the pole to warn of approaching danger and the killer whale was thought to be the embodiment of drowned people returning to visit to name a few.  You could tell a female from a male by their protruding lips.  The Alaskan woman would cut her lips and place a piece of wood into the cut and allow the lip to heal.  This was considered to be beautiful and so that trait for women also could be seen in totem poles that depicted women.

They have stopped using red cedar trees because they developed tree rot.  They use yellow cedar now because of its tendency not to rot.  Each time something happens to a totem pole, they remove it from its resting place and use it as a template for the master craftsman to carve another one exactly like the one that is damaged.  The yellow cedar is an oily wood, making it harder to paint.  They are still painted; however using many different colors and types of paint.  There are few craftsmen today, and the main one in Ketchikan is almost 70 years old.  They are trying to interest the youth to become his apprentices.

The original Alaskans were nomads.  They literally took their homes with them where ever they went.  The men of the village would cut down a tree to make the planks for the home (lodge).  It is said you can tell who carved each plank by the way they shaved the wood down.  The entire village would live in a one room lodge that could comfortable sleep 30 – 40 people.  You might ask where do they store their belongings.  The answer is simple, they made it so that each plank could be lifted up from the floor or any seating area  for storage beneath it.  These lodges had totem poles on the inside and outside to protect them and to honor their chief or leader.  The tour lasted about 2 1/2 hours but was very interesting and informative.

We have met some really nice people thus far.  Today at lunch the couple we sat down with actually gave us a bottle of wine once they heard today was our anniversary. Because it is a special day for us,  we decided to go to the Silk Harvest for dinner.  It is an Asian Fusion themed restaurant.

Because this is a speciality restaurant you had to order from the menu.  Little did we know that every thing we asked the waiter about, would later be bought to our table for us to eat!!

The restaurant was small, romantic and quiet compared to the Seaview Restaurant (the buffet) we had been frequenting.  It was nice to be in a true adult atmosphere.

After dinner, we went to see a show.  It was a compilation of 80s and 90’s music being song by a guy named Hamilton.  Interesting enough he used to play Simba in The Lion King on Broadway.  He had a great voice, but we left before the end as we were tired and are determined to be up by 6:00 tomorrow morning because we will be going through Tracy Arm Fjord (these are glaciers) and we should be able to see them from our balcony (how amazing is that). 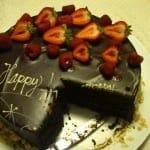 When we returned to our cabin we were greeted with another wonderful surprise from our daughter, a chocolate raspberry cake wishing us a happy anniversary.  It bought tears to my eyes.

Last thought for today, the sun was rising when we got up at 3:00 this morning and when we went into the show at 9:00pm, dust was just beginning. That is about 15 hours of daylight, wow.

Take lots of photos : Have your camera ready at all times otherwise you are sure to miss something awesome.

Enjoy the entertainment : Do try to attend as many of the shows as you can. The shows are included with the cruise. The talent is top notch and the shows really are magnificent.