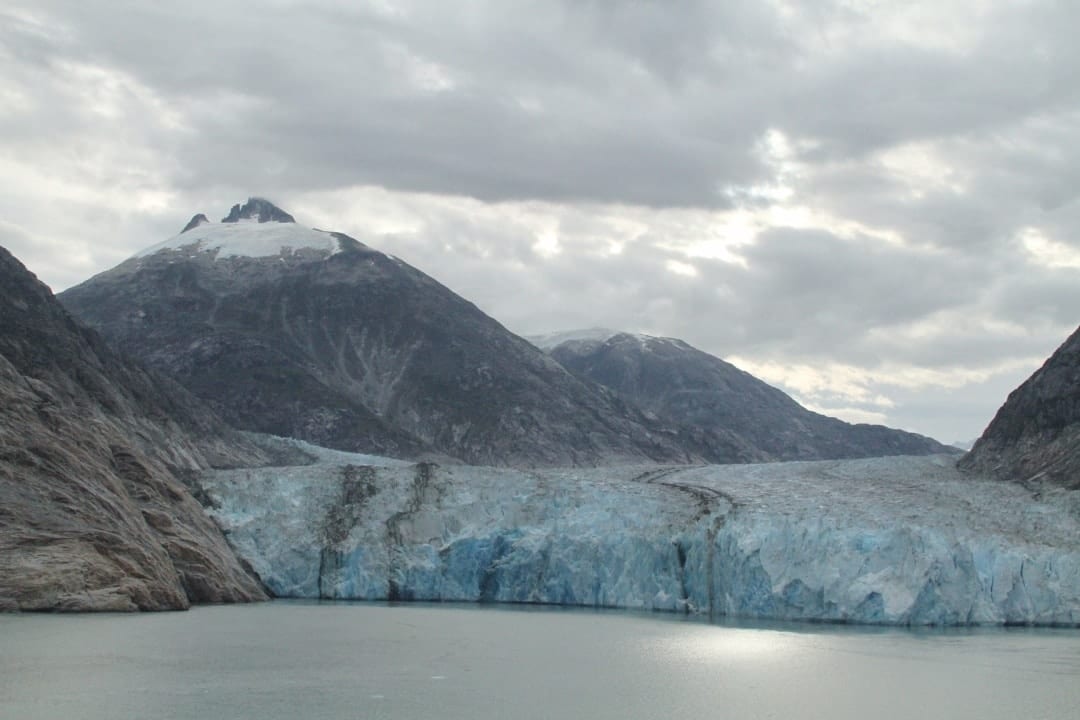 Today it was necessary that we be up and ready by 6:30 am as the ship was going through our first set of glaciers, Tracy Arm Fjord.  From our balcony we could see the color of the water had changed from the grey blue of yesterday to a more vibrant greenish blue.  The captains first mate did a running commentary of everything we were seeing and hearing.  Fortunately they ran the commentary on channel 4 of the television.  There was so much information that I could not keep it all in my head to document.

The one story I remembered is that one area of the Fjord is called Fjord’s Terror because when the the original captain went to this area the sea was not calm, the winds were blowing fiercely and all of the bits of ice in the sea filled him with terror.  Hence, they named it Fjord’s Terror.

The sea in this area is different colors because of the “silt” in the water.  The silt acts as a sifter and filters the water.  Once the water is filtered you have fresh water over salt water which gives the different colors to the sea.  The colors are blue grey to blue green to a very dark grey. 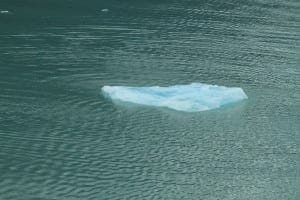 The captain would  let us know if he spotted any animals and where they were.  To be in the right place at the right time was impossible.  First you had to know terms used by sailors i.e..star board, aft, etc..and which direction the ship was headed to know the difference between left and right.  After a small amount of time we just gave up trying to chase things and just enjoyed what we were seeing.  The glaciers had hues of green and blue in them.  The whiter they were meant they had more oxygen in them.  The colors in the glaciers come from magnesium and iron oxide.  The glaciers are forever changing as small pieces fall off.  We were able to witness this.  The sides of the mountains were covered in greenery in places and in other spots the rock was very slick and devoid of any vegetation.  There were pieces of ice all over the sea, some larger than others.  In spots there were streams cascading down the mountains.  It was all so incredibly breath taking.  The glaciers are so delicate that the captain would not give any commentary that could be heard outside in some area for fear of causing pieces of the glacier to break off.

We were again prepared for very cold weather but surprisingly it was not too bad.  We did need our hats and coats but that was all.  Thankfully we also managed to have another rain free day. 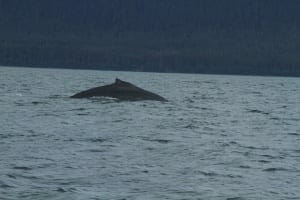 After taking a tender boat from the ship to Juneau (about a 10-15 minute process) we begun our tour to go whale watching and to see the Mendenhall Glacier.  Whale watching was first.  Once again, we had to take a 25 minute bus ride to get to the pier.  Our bus driver would have talked to us but her microphone was broken 😉.  At the pier we got on what we were told was the newest and fastest boat for whale watching.  We were driven out into the ocean to begin looking for whales.  The naturalist on our tour was named Sean.  He explained that when you are looking for whales you must first look for a poof of water spraying into the air (this comes from their blow hole) and if you see that, a whale may be coming above water to dive below.  A whale can hold its breath anywhere from 15-45 minutes.  If you are lucky you will  find one who come up every 15 minutes.  Once a whale dives back into the sea,  the game changes from whale watching to whale waiting.  We were lucky to see 5 whales above the water and I got nice pictures of them.  We actually saw the water spout more than 5 times but the whale did not always come above water.  This tour was for 2 1/2 hours but it didn’t seem that long.  Because we were on a tour that begun at 3:00pm and were on the water on an overcast day I had to wear my gloves and hat as it was cool.

After the whales we went to see the Mendenhall Glacier.  It was about a 25 minute ride from the last tour.  By now it was almost 6:00pm, and we were told we were with the last tour for the day.  This was a self-guided tour.  The glacier is now located in a National Park were other animals can be seen.  We were able to see Salmon fish and a black bear with her three cubs.

The glacier has retreated about 2 miles since 1929, when the Mendenhall Lake was created.  The end of the glacier currently has a negative mass balance (it is decreasing in size) and is expected to continue to retreat for the foreseeable future.  It was once part of a much larger glacier but because of the warming weather the larger glacier has split into two different glaciers.  Mendenhall is the largest of the two. The people who live near the glaciers depend on them for their fresh water.  Once they are gone the people relying on this fresh water will be out of their fresh water source.  It was originally known as the Glacier behind the Town or Glacier behind the Little Lake by the Eskimos and was renamed in 1891 in honor of Thomas Mendenhall.

Learn a little ship termiology : Before the cruise try to learn familiar ship terminology.  It could be very useful.

Don’t sleep your cruise away : Don’t miss an opportunity to see something incredible by sleeping late. This is particularly true for a place like Alaska where there are so many daylight hours.