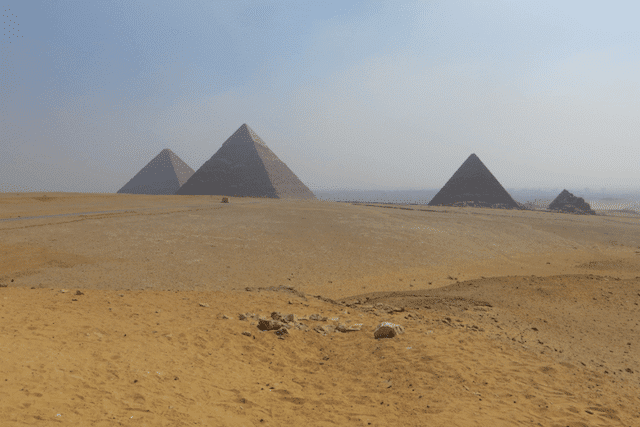 Going to Egypt transported us into a completely different world. We were visiting sites that were created thousands of years ago.

The amount of history is beyond belief. We were in cities that have existed much longer than the United States, but, due to colonization, war and other social events, are in a way suspended in time.

Egypt, and Cairo in particular, is both a major metropolitan city and a rural village. The roads are crammed with cars and makeshift vehicles like tuk-tuks as well as horse drawn carriages, donkeys, mules and camels. Buildings range from super modern high rises to small mud brick houses. It is a country operating in a modern world with oil refineries, factories, and cars without the regulations that prevent them from destroying the environment. As a result, even though it hardly ever rains, the sky is always grey, due to the smog. The population has exploded without the infrastructure to provide water or proper sanitation in areas, leading to waterways that are collecting trash. The poverty and income inequality is astounding. Due to revolutions that have occurred to try to correct this inequality, the tourism industry has suffered, making this disparity even greater. This situation has created a large group of people that are looking for something better, thus making them susceptible to the lure of terrorist organizations. All of this leads the government to provide a heavy military presence to both protect citizens and provide security to tourists with the hope of making them feel safe. The military presence is omnipresent. Armed guards with automatic weapons and dogs are at the airport, hotels, tourists sites and check points throughout the roadways. In a nutshell,

Egypt is a dichotomy, being a magical place where you can feel the presence of the distant past and the oppression of the present.

Hopefully, the presence of the past provides enough hope to the citizens of a nation that descend from one of the greatest empires of all times.