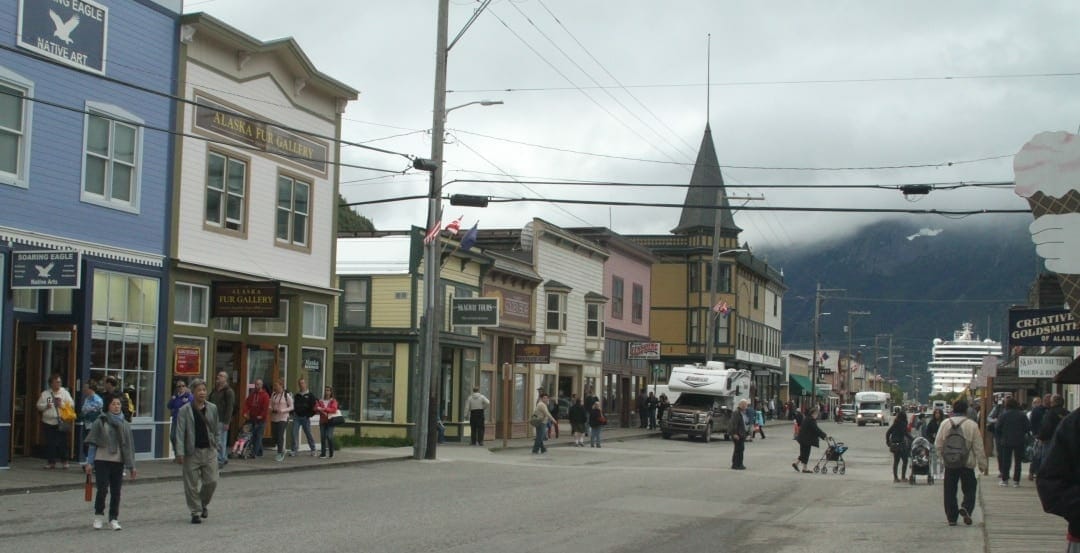 We were up and ready early today as our tour left at 8:00am.  When we looked out onto the balcony we saw “graffiti” all along the mountainside.  We would later find out the it was actually insignias representing each ship that has ever docked in Skagway.  It is said that the more liked the captain the higher the insignia. 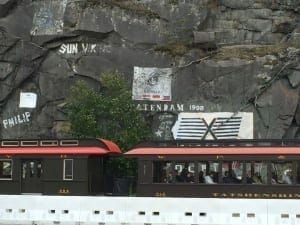 We were with Southeastern Tours to see Whitepass Summit and a tour of the city of Skagway.  It was a short walk from the pier to the tour.   Our  guide, Brian, actually came from Atlanta Georgia and attended school at Georgia Tech (a home boy for us).

Skagway was built in just 6 months in the early 1900s due to the gold rush in the Yukon. In fact, in the beginning the town’s most plentiful business was brothels. While all the men were trying to strike it rich, the women were running all the businesses and buying up all the land.  Hence, today most of the land is still owned by those women’s families and are quite expensive.

There has never been a fire in this city and because of this all of the buildings in the downtown area are on the national registry.  All of them are still the original structures giving the town a feel of being in the early 1900s.

There is no malls, movie theaters, hotels, etc. There are no street or traffic lights. Everyone just walks where ever and whenever they want.  There aren’t any crosswalks either!!

Since the end of the gold rush, the main business is tourism.  Tourism is from May to September and when it is  over there is no work for most of the citizens until the season begins again.   Most of the people working during the tourist season are transient and only live in Skagway during that time.

Once the transients leave, the population of Skagway is a whopping 980 people.

Because there is no crime, no one locks doors and they feel free to enter each other’s homes at any time.  During the winter months there is 20 hours of darkness each day. 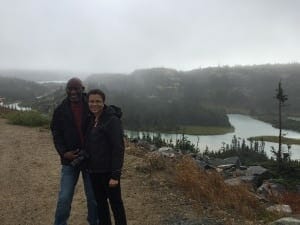 Skagway is isolated from the remainder of the state.  There is no road that would take you from Juneau to Skagway.  There is a highway that would take you into Canada because it is only 10 miles away.  It makes you wonder why Canada didn’t purchase Alaska before the USA did.  All of their food is flown in from Seattle once a month.  This makes living here quite expensive.

The weather is mostly rainy everyday.  When the winter comes they get a large amount of snow, and because of the mountains and all that snow, they have avalanches.

The city of Skagway doesn’t have a physician only a couple of nurses.  Because the state of Alaska requires all expectant mothers to be with a physician at the time of birth, an expectant mother will leave her home and family during her last trimester and move to Juneau, living in a rooming house until the baby is born.  While she is gone the entire town takes care of her family and home.

This is the only day we have encountered rain so far.  It was drizzling when we docked and when we left for the tour.  By the time we returned, the rain had stopped and we were able to explore the city with out any problems.  The wind was blowing making it a little cool but other than that everything was beautiful.

Don’t let the rain deter you : Even if it rains or the weather is cold, continue on the tours.  Make sure to take a rain jacket with you on trip to Alaska. There is so much to be seen and the rain may not last.

Be inquisitive : On the tours ask questions. The guides are eager to answer and may even take you to see something spectacular that’s not on the tour.